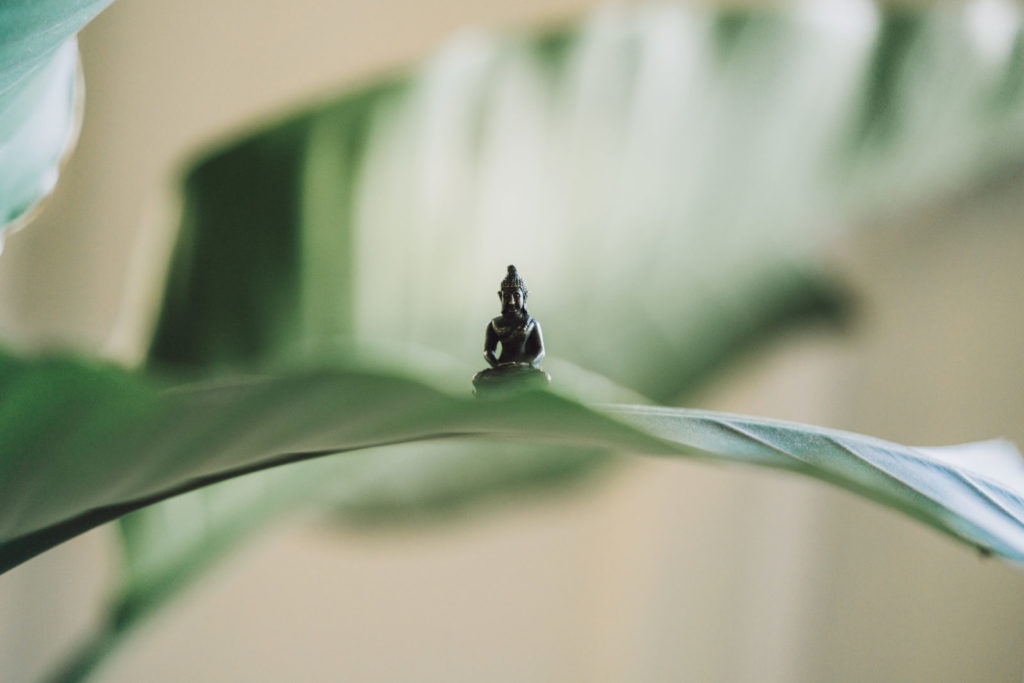 “A moment of self-compassion can change your entire day. A string of such moments can change the course of your life.” Christopher K. Germer

Guilt can be a very powerful emotion. When dealing with a major lifestyle change it’ very possible that if guilt is one of your go-to reactions, you’re going to have to deal with a lot of it. If you’re a guilt-prone individual you probably feel guilty, and just a little bit shameful, for all the unnecessary stuff you own and continue to accumulate. While guilt can sometimes motivate positive actions, like driving you to “do better next time” when you make a mistake, it can also get in the way of your personal growth and evolution. In order to let go of your guilt and shame habits you need to first understand why it’s so easy to get attached to feeling guilty –there are a lot of “good” reasons! Then we’ll take a look at some of the downsides of guilt and see how you can really work them out of your system.

33.1 Why We Get Attached to Feeling Guilty

“People have a hard time letting go of their suffering. Out of a fear of the unknown, they prefer suffering that is familiar.” Thich Nhat Hanh

Have you ever wondered why you have such a hard time letting go of guilt? The simple answer is, guilt makes us feel “good” in certain limited ways.Sounds counterintuitive, but according to neuroscientific research, “despite their differences, pride, shame, and guilt all activate similar neural circuits, including the dorsomedial prefrontal cortex, amygdala, insula, and the nucleus accumbens. Interestingly, pride is the most powerful of these emotions at triggering activity in these regions — except in the nucleus accumbens, where guilt and shame win out. This explains why it can be so appealing to heap guilt and shame on ourselves — they’re activating the brain’s reward center.”[1]

Guilt and shame are also often socially reinforced as a “positive” personality trait and are “normalized” as a ways of modifying people’s behaviour, from childhood to adulthood.This is often even more the case if you’re a woman or have been socialized as female. As psychologist Melanie Greenberg PhD puts it, “women and girls have been socialized for thousands of years to get along with others, not hurt anybody’s feelings, and take care of loved ones. In many (but not all) families, women take more responsibility for staying in touch with relatives and friends, keeping up with everybody’s schedules, and keeping the household functioning effectively.”[2] It’s important to take into account the social pressures you may have been under as a child which may have influenced your self-perception and tendency towards self-imposing guilt and shame.

The thing is, guilt can in fact have “positive outcomes” in terms of our overall behaviour (though you’ll see later on why this isn’t, by a long shot, the best, or even a particularly “good” way to motivate personal transformation and true self-actualization). In three studies cited by the Personality and Social Psychology Bulletin, “people who recalled their immoral behavior reported greater participation in moral activities (Study 1), reported stronger prosocial intentions (Study 2), and showed less cheating (Study 3) than people who recalled their moral behavior.”[3] The fact that guilt “works” as a technique for getting people to adjust their behaviour is clearly one big reason why it’s such a prominent strategy in everything from parenting to the the speeches of world political and religious leaders.

There’s also research showing that people who have strong tendencies towards feeling guilty make “good leaders.” An article published by the Harvard Business review states that “people who are prone to guilt tend to work harder and perform better than people who are not guilt-prone, and are perceived to be more capable leaders.”[4] Studies published in the Current Directions in Psychological Science journal also show that people who are “guilt-prone…who begin to chastise themselves at the mere thought of doing something wrong are less likely to behave immorally as a result of their unwavable conscience.”[5]

Great. So guilt seems to “work,” right? So, if you want to declutter my home and switch to a minimalist lifestyle you should just magnify your feelings of guilt about all the unnecessary stuff you own and it should be motivation enough! If it ain’t broke, don’t fix it, right? Well, that’s not exactly the whole story….

“Lack of forgiveness causes almost all of our self-sabotaging behavior.” Mark Victor Hansen

In her book “The Willpower Instinct” health psychologist Kelly McGonigal puts forward that “Surprisingly, it’s forgiveness, not guilt, that increases accountability. Researchers have found that taking a self-compassionate point of view on a personal failure makes people more likely to take personal responsibility for the failure than when they take a self-critical point of view. They also are more willing to receive feedback and advice from others, and more likely to learn from the experience.”[6] In other words, if you’re trying to rid yourself of clutter and shift into a holistic minimalist lifestyle you’re more likely to do so if you take the time to work through the guilt to a place of self-compassionate. From there you will be much better able to tap into the personal responsibility necessary to motivate concrete lasting action in downsizing and decluttering every sphere of your life.

Another reason guilt is not a sustainable or truly “healthy” motivator is that many studies imply that guilt can easily become intimately linked with pleasure. When we consistently feel guilty for doing something, and keep doing it, the feeling of guilt becomes associated with the pleasurable action and thus becomes part of the pleasure itself. One concrete example of this is shown in research by Kelly Goldsmith, an assistant professor of marketing at the Kellogg School of Management, which demonstrated that making people feel guilty about something they want (in this case, dieters who were not supposed to eat certain things) amplifies whatever pleasure they subsequently indulge. Goldsmith explains that, “for a lot of people these cognitive associations can form just based on what we called repeated coactivation. When pleasure’s activated, guilt is activated, and so in our brains, over time, those two become connected.”[7]

If guilt and pleasure have become associated in your relationship to owning or buying “stuff,” then you’re going to have a way tougher time divesting yourself of your excess material goods or stopping yourself from accumulating unnecessary surplus. The “guilty-pleasure” feeling can become as addictive as the actual act of buying something new for the temporary high. Especially for those of you harboring an “inner rebel” who really enjoys going against whatever it’s been “told” to do, even if the personal making the rules is you!

The guilt-pleasure dynamic is big piece of the whole “self-sabotage” thing as well. When you fundamentally believe you’re a “bad” person (a belief supported by all the things you feel guilty for that you’ve been mulling over for way too long!) you’re far more likely to continue repeating behaviours that allow you to continue with your negative self-perception! Whether or not we like to admit it, there’s a certain kind of profound satisfaction that comes from reinforcing our vision of ourselves, even if its a negative one. It’s important to identify these internal dynamics in order to shift towards a your new reality, one based on self-compassion and personal responsibility!

“With everything that has happened to you, you can either feel sorry for yourself or treat what has happened as a gift. Everything is either an opportunity to grow or an obstacle to keep you from growing. You get to choose.” Wayne W. Dyer

The first step in getting out of a guilt cycle is to stop magnifying your errors or faults. As author and activist Helen Keller puts it, “failures become victories if they make us wise-hearted.” We get stuck on the hamster-wheel of guilt when we allow our minds to focus in on that thing we did or said and replay it over and over again without any hope of changing the outcome. Personal responsibility and self-compassion demands that, instead of punishing yourself emotionally for months on end, you accept the situation happened and choose to actively move forward and learn from your mistakes.

As you probably know, holistic minimalism means simplifying all arenas of your life, including your relationships and ways of communicating. Most of us lose huge amounts of time and energy through bad communication and mismanagement of our relationships. Getting out of guilt-mode is one among many essentials to having a healthy and positive relationship with yourself so that you can build healthy sustainable relationships with others. It may be one of the most often quoted clichés out there, but it’s a fact that in order to love someone else well you have to start by loving yourself. And without self-compassion and accountability that just ain’t happening! Tools like Non-Violent Communication are great, but they need to applied to oneself as well as to others!

Look at it this way. Your self-perception and self-talk is the glass ceiling limiting your self-actualization. Remaining stuck in a guilt and shame based paradigm is not going to allow you to reach your full potential. End of story.

33.4 Replacing Guilt with Remorse (and Knowing the Difference…)

“In the process of letting go you will lose many things from the past, but you will find yourself.”Deepak Chopra

All the above about letting go of guilt comes with the caveat that it’s important to be able to distinguish natural feelings of remorse and regret from the soul-tormenting, unhealthy patterns of guilt and shame. Feeling remorse for something you’ve done that hurt someone or created a difficult situation is to be expected. It’s part of having a heart and a conscience! The unhealthy, unhelpful part comes when you stay stuck on those things for too long instead of learning from the situation and moving on. As bestselling author Eric Barker puts it, “Remorse is when you feel bad about what you did. Guilt is when you feel bad about who you are.”[8]

This is a super important distinction to hold on to and remind yourself of whenever you start tearing into yourself for doing or not doing something “right.” You are NOT your actions! If you start believing “you are what you do” then you’re ultimately screwed…because changing who you are is a heck of a lot more difficult then changing how you act!

Other ways to identify when you’re feeling guilt versus remorse can be found in looking at the intensity, duration and impact of your feelings, in addition to any distortion that may be taking place (the amplification or magnifying of the situation you’re feeling guilty about, where the event becomes disproportionate in your minds eye when compared to its true impact). Guilt and shame tend to have a mildly obsessive quality to them and often leave us weighed down by negative emotional fallout for unreasonably long periods of time.

All that being said, if the thread of guilt runs deep in your fibers you should definitely consider finding a counsellor, therapist or coach who can support you in your transformation process.

Action Point Summary – Here’s What You Need to Do Now!

“Forgiveness is giving up the hope that the past could be any different.” Oprah Winfrey

In other words, you have the power to transform your life starting now. If guilt and shame over your materialist past or your hard to break accumulation habits has been feeding your inner guilt monster, it’s time to tame the beast!